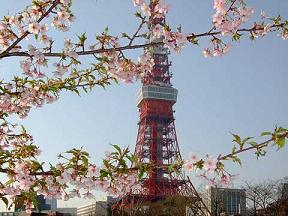 We have a beautiful public park, which is called Shiba Park鐚?????????鐚?, just a few minutes away from the Shiba Park Station鐚?????????薈?鐚?on Toei-Mita line鐚???遵?銀????亥??鐚?. The park is located between the Minato Municiple offices and Tokyo Tower. We can see Tokyo Tower very clearly from the park; therefore, the park is a popular spot for dates, especially during night time. Famous actors sometimes gather at the park to shoot television. Tokyo Tower and the Zojoji-temple (紜?筝?絲?) from Shiba Park. Shiba Park opened on October 19^th?of 1873, and is one of the oldest parks in Tokyo. There are many hotels, schools, public pools, libraries, and other helpful facilities near the park. Baseball fields and tennis courts are facilitated at the park. Another attractive point of the park is the nature. The park is surrounded by a lot of trees. There are over 5500 trees at the park. It offers a good time and a good place for rest for business people. We do not have a lot of places which we can take a rest with the beautiful nature, because of too many high buildings or too bright shine; therefore, Shiba Park is like an oasis for business people. The park is located […] 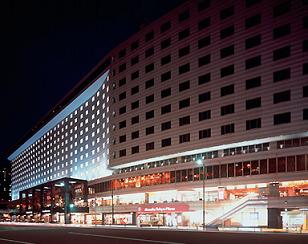 Akasaka Tokyu Plaza (莎ゅ????掩?ャ???????)?is a complex facility where the hotel and the shopping space located near the Akasaka-mitsuke Station(莎ゅ??荀????薈?):?a subway station on Tokyo Metro Ginza Line or Nagatacho Station(羂悟?亥?咲??) a subway station on Tokyo Metro Yurakucho, Hanzomon and Namboku Lines. There are so many Japanese high class brand shops at the store. You can find plenty of fashion, amenity, jewely, restaulant, even a hotel(Akasaka Excel Hotel Tokyu). The department store will offer good opportunities to enjoy shopping at Japanese high class brand shops. And they also have great sales depending on the season. As for shopping, you can see “Mariage Akasaka Branch” which has jacket and amenity for ladies, “International Jewelry Prize” which offers total coordinate with diamond accessories on the building. Especially, for people who would like to enjoy?unique Japanese style restaurant, I strongly recommend Ninja restaurant on the first level of the department. I have already mentioned about the detail of the restaurant.? Please see the details here. This department store is not big as famous department store like Takashimaya or Mitsukoshi. But even like that, it’s ok to purchase daily necessities and you can feel?the atmosphere of Japanese department stores at the Akasaka Tokyu Plaza. If you […]

Have you ever been to Ninja at Akasaka? This restaurant is quite popular for tourist from abroad, even for young Japanese. Creative artist repeat coming here. Iga Ueno at Mie prefecture and Kouga at Shiga prefecture are so famous due to Ninja. Ninja is one of art of warfare developing in the above area. Some Japanese visit Kyoto and they have a chance to get wear the Ninja Kimono to take a picture. Some tourist bring back souvenior, Shuriken鐚????茖???ｏ?? or Katana(???鐚? those are sort of Ninja’s arm. As you see, they are not familiar with us, of course even with tourist from abroad in a usual life. This restaurant presents Ninja well evoking to the taste of dishes, visual of dishes, and the interior of the restaurant. They cook Japanese foods by European, Chinese and American style. There are flexibilities to open the others, not egoistical way of cooking(I think this is important mind to welcome the differencies). Then this restaurant opened to vegetarian, which situation is not easy to find still now in Japan. Some of the menus from Ninja. Participatory way of enjoying addicts you to come back to this restaurant and your friends from abroad can also […] 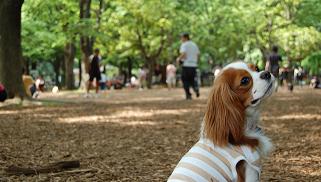 Sometimes I recognize so much that green is necessary to heal the tired body. At the same time, it is not so easy to go countryside once starting to get used to living down town. Do you know Yoyogi Park(篁ｃ?????????鐚?? This park is located next to Meiji???Shrine Temple(???羃紫??絎???. This location is quite convenient to access. Then they offer several type of pastime. 1. With your dog They prepared the dog run in a park. This area is divided by the size of dog, for small or large. Your dog can be also released by the stress in the dog run. You can spend nice time with your dog. To use this service, please take contact with service center of Yoyogi Park in advance. Then please register your dog as member with the dog registration at your living city and the documentary proof of vaccine against rabines. Once you get the member ship, you can enjoy your holiday with your lovely dog. You can check this site for information about the dog run. 2. By bicycle Do you like to take bicycle? If you have the hobby to take the bicycle, you can bring your bicycle to the course. In case […] 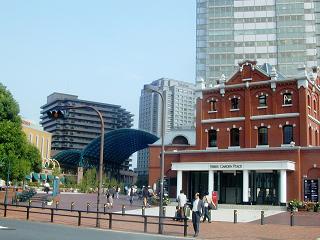 Ebisu Mitsukoshi(??究??絲推??莇?鐚? Around Ropongi area, you will not be able to find easily the Japanese typical department store. You can find easily the goods you want at your favorite or creditable store are already fixed around Roppongi. This condition can be the proof that you are at celebrities class. In case that you are invited formally suddenly by your mother in law or your girfriens’s(Or boy friend’s) mother, for example, meanwhile, the situation that you cannot imagine what you have to bring as a souvenirs, what will you do? You know well that many Japanese adore the brand. I can say that some madame and monsieur still tend to be caught their mind by the high class department store’s wrapping paper. Even you will bring something not so expensive, department store’s wrapping paper grade up even your credit. Even you don’t expect such a situation, you can remind that Ebisu Mitsukoshi( ??究??絲推??莇?) locates around Roppongi鐚?????????????downtown. This department store is tiny, established by 4 floors, but so suitable to choose and everything is ready. Even with your kids those need to change the diapers, you don’t need to hesitate. Then you can also have a chance to encounter the reasonable foods […] 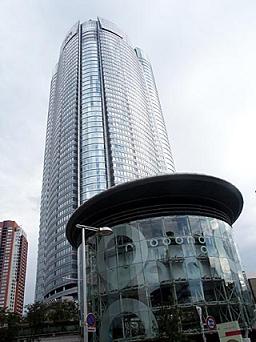 Now once you hear Roppongi(???????), it remind you of Ropoingi Hills (??????????????), Izumi Garden (羈?????若?????)?and International caf辿s or restaurants, which are something luxury and exotic. Actually at Roppongi, it???s easy to find the international and luxury air. To reach those modern style at Roppongi, it might be unimaginable for you that Roppongi was a residence area for samurai in the Edo era. Once moving into the Meiji era, it was replaced?by the?Japanese military base. Then, after World War 2, these equipments were switched to the UN. Map of Roppongi in the Edo era. Accordingly such an Americanized circumstance allowed Roppongi to make international air. Of course, some embassies around Roppongi also make the international air. Under the above historical track, Roppongi becomes one of the attractive downtown, as you see Roppongi Hills, Izumi Garden and so on. Now you got the summarized background of Roppongi. Keeping?it in your mind, you can spend your customized day at Roppongi. Spending time at Roppongi will not make you feel nostalgic of your country and you can also enjoy Japanese taste. Everything you need from day to night is prepared at Roppongi, it will not make you bother. First of all, on the foot […] 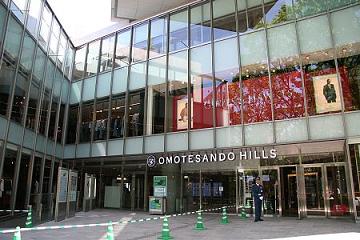 Omotesando Hills (茵??????????????)?was built in 2005, which was part of a series of urban developments in Tokyo done by the developers, Mori Building and designed by Tadao Ando. It occupies a large proximity of Omotesand??, containing over 130 shops and 38 apartments. Omotesand?? is a famous shopping and residential road in Aoyama. The construction ran at a cost of $330 million, replacing the Bauhaus-inspired D??junkai Aoyama Apartments (???羹や?????絮宴?≪????若??), which had been built in 1927 after the 1923 Kant?? earthquake. A small section of the old apartments still remains, having been reconstructed in the Southeast part of the new complex. Dojunkai Aoyama Apartments Shopping For many years, Omotesando has been the trendsetter in Japanese fashion and culture. These days the Omotesando area has a new focal point, the Omotesando Hills. Hosting near 100 retail outlets with its target market being a more mature audience whom enjoy the city life while having a strong sense of fashion. The complex boasts flagship stores, boutiques and exclusive outlets from leading overseas brands as well as exclusive domestic brands offering a unique fashion style known as the ???Omotesando Hills Mode???, especially for mature individuals who would prefer avoiding the boundaries of style. Aside from the […] 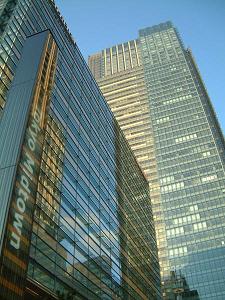 Set amongst lush greenery lays the urban Tokyo Midtown (??延根???????????帥????)?development, comprising of six stylish buildings featuring a variety of facilities such as hotels, museums, stores, restaurants, offices and leisure space. Art is truly alive in every corner of the town welcoming visitors from all walks of life and providing your every day urban life with a superior quality of living. It is also the key factor in the proliferation of Japanese design around the world. The complex was completed in March 2007 at the cost of ?370 billion and sports the tallest building in Tokyo and the new quarters of the Suntory Museum of Art. It???s located in a prime location in Roppongi, part of the Minato ward on the site previously occupied by the Japan Defence Agency. Aside from having a vast selection all the exquisite, high-end drink, food and fashion – Tokyo Midtown is also the home of Design Sight 21_21, a design gallery/workshop created by world-renowned fashion designer Issey Miyake and architect Tadao Ando. “The idea was to create not only a museum that shows exhibits,” says Ando, “but also a place for researching the potentiality of design as an element that enriches our daily life, a […]

Yebisu Garden Place, located in Ebisu, which is a neighborhood in Shibuya, Tokyo. It???s conveniently Located near Roppongi and central Shibuya. Ebisu can be easily accessed with the JR Yamanote and Hibiya lines via Ebisu Station. It has boutiques, vintage stores and patisseries all within easy walking distance from Ebisu station. Ebisu’s main tourist attraction is centred around the Yebisu Garden Place. Accessible from the East Exit of Ebisu Station via the Yebisu Skywalk covered moving walkway; it includes the headquarters of Sapporo Breweries, The Yebisu Beer Museum and the Tokyo Metropolitan Museum of photography. Ebisu was founded around 1928 as a community developed around the Japan Beer Brewery Company facilities where Yebisu Garden Place now stands. Yebisu Beer, named after Ebisu, one of the Japanese Seven Gods of Fortune, was introduced in 1890 by Japan Beer and has long been a local favourite. The area adopted its name from the train station built in 1901 by the company to facilitate distribution of its beer. Japan Beer has since reorganized and was renamed Sapporo Breweries Ltd. After the breweries were moved to Chiba in 1988, the area was redeveloped as the Yebisu Garden Place, which opened to the public in […] 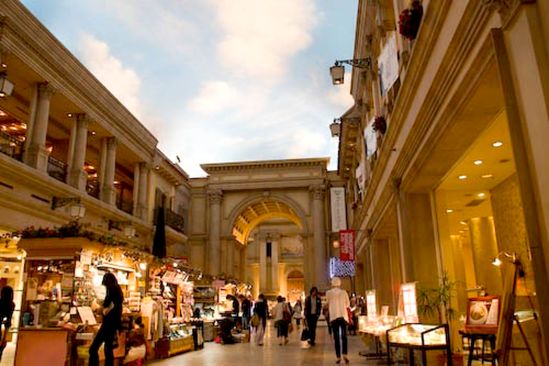 Palette town (?????????????帥????, sometimes mistranslated to pallet town) is a huge complex facility containing attractive amusement spots, stores and restaurants. It is home to one of the largest Ferris wheels in the world at 100 meters in diameter and 115 meters high known as Daikanransha (紊цΤ荀ц??). It???s extremely popular because you can look down at the sea and the skyscrapers of Tokyo at the same time. You can enjoy a panoramic view of the coast from Haneda down to the Boso Hanto Peninsula. You can also see Mt. Fuji on a fine winters day. Its huge Ferris wheel can also be seen all across Odaiba signalling to prospective visitors that Palette town is a fun and interesting place to be. Palette town is made up of several attractions with a large shopping centre known as the Venus Fort (??眼?ｃ?若????鴻??????若??), a women’s theme park filled with fashion, beauty, and many other items of interest. Venus Fort was first opened in 1999 and designed to look like 17th century Europe, there is even a staged sky on the roof that transforms from day to night every few hours. It???s not only the decor that Venus Fort shares similarities with Las Vegas??? Caesar???s […]