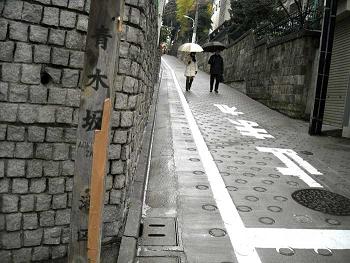 You may have visited Minami-Azabu to make some procedures at the embassy of your country.

Many of these embassies were built in this area when Japan opened the country to foreign trade and diplomatic relations, in the mid 19th century.

This concentration did not happen by chance. ?There are mainly 2 reasons for this.

Firstly, the then Japanese government thought that it would be relatively easy to guard the embassies if they were concentrated in one area.

Secondly, there were broad lands waiting to be utilized in Minami-Azabu. ?There used to be many mansions of Daimyo (紊у??, feudal lords in the Edo period) around this area, which were no longer in use.

Speaking of Daimyo, in Azabu, there are many places, especially slopes, named after Daimyo.

For example, Aoki-zaka(????????, Aoki slope) in the picture above, was named because there used to be the mansion of the Aoki family in the Edo period. ?Today, the Embassy of France stands where the mansion used to be.

Walking by the slopes, you will often see signs, on which the name of the slope is written. ?Each names represents the origin of the place name, which can let us feel the history of where now we are standing.