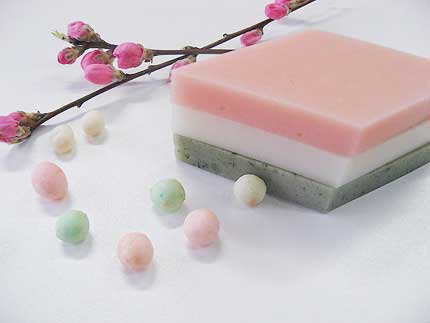 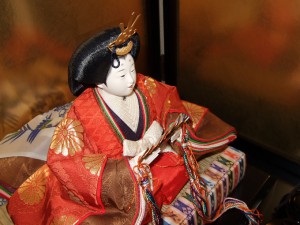 On March 3rd, a festival called Hinamatsuri (???腑???) is held.? Hinamatsuri is a festival for girls, and is celebrated by displaying a set of dolls, Hinaningyo?(???篋阪就)

The custom of displaying dolls began during the Heian period.? People believed the dolls possessed the power to?trap bad spirits into itself.
Hinamatsuri originates?in an ancient Japanese custom called Hina-nagashi (???羌????), literally ‘doll flowing’, in which straw or paper?Hinaningyo,?believed to take away bad spirits with them,?are set afloat on a boat and sent down a river to the sea. 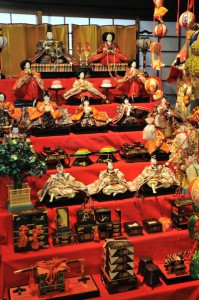 Today, in most homes, the dolls are not flowed, but just displayed.? The dolls are?representing the Emperor, Empress, and their merry men, dressed in Kimono of the Heian Period (794-1185).

The arrangement of the doll differ by area, but the popular way of setting the dolls are to place them on a stair-shaped stage.
On the top stair is placed the Emperor and Empress.? On the next is the three court ladies.
With the dolls, many instruments used in the palace life, such as drawers and oxcarts,?are usually displayed.

Families generally start to display the dolls around mid-February and take down the platforms immediately after the festival. Superstition says that leaving the dolls out past March 4 will result in a late marriage for the daughter! 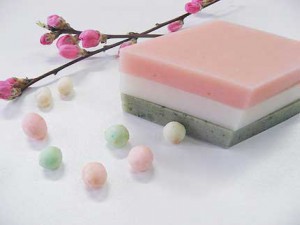 There is a?customary drink for the festival?called Shirozake (??初??), a sake made from fermented rice.? There are also customary foods, Hinaarare (????????????),?a colored , bite-sized rice crackers flavored with sugar or soy sauce, and Hishimochi (?偓??), a diamond-shaped colored rice cake. ?Chirashizushi (??＜?????絲水??), Sushi rice flavored with sugar, vinegar, topped with?eggs, shrimp,?and a variety of ingredients, is often eaten. ?A salt-based soup called Ushiojiru (?????????羆?) containing clams still in the shell is also served. ?Clam shells in food are?a symbol of a united and peaceful couple, because a pair of clam shells fits perfectly, and no pair but the original pair can do so.

Chirashizushi and Ushiojiru are usually made in each family, but are purchasable at supermarkets.? Hinaarare and Hichimochi are in supermarkets as well.? Hinaningyo are quite expensive, but paper dalls or fabric dolls are available at reasonable price.? If you have a girl, why not celebrate Hinamatsuri starting this year 🙂