A Day Out in Yokohama

Right smack along Japan???s coastline is Yokohama (罔???), Japan???s second largest city by population. A mere 30 minutes’ train ride from Tokyo Station (Tokaido Main Line), Yokohama offers a somewhat international flair to its local culture given its history. The city has a lot to offer, with both its charming, walkable streets and its breezy bay front, creative arts scene and microbreweries

Towards the end of the Edo Period (1603-1867), the port of Yokohama was one of the first to be opened to foreign trade in 1859. Yokohama quickly grew from a small fishing village into one of Japan’s major cities. Even today, it remains popular among international expats, has one of the world’s largest chinatowns and has preserved a few former Western residences in the Yamate district.

Yokohama houses a variety of interesting districts including Minato Mirai, Yamashita Park, Chinatown, Motomachi shopping street and the historic Yamate district. The compactness of Yokohama enables visitors to wander around the city in a different fashion to Tokyo. For instance, Chinatown and Minato Mirai are just a few kilometers apart, and in between, there are a number of places including Yokohama Stadium (home of the Baystars), Yamashita Park, Osanbashi Pier, Yokohama Red Brick Warehouse, The Cup Noodles Museum, Yokohama Cosmo World, and the Landmark Tower.

Here is a summary of some major points of interest: 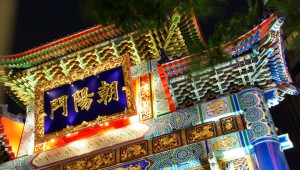 Yokohama Chinatown (Yokohama Chukagai) is Japan’s largest chinatown, located in central Yokohama. After the port of Yokohama opened to foreign trade in 1859, it became the residence of the many Chinese traders who settled down in the city, and in turn Chinatown eventuated.

Colorful gates mark the entrances, and there are two Chinese temples in the area. The largest Chinese temple is Mazu Miao Temple and is located directly across from the China Museum. There are numerous restaurants serving a wide variety of Chinese foods. 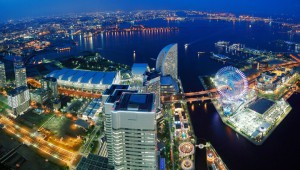 The urban area by the bay, Minato Mirai 21 means “harbor of the future”. It has many large high-rises, including the Landmark Tower and host an array of attractions.There are no shortage of shopping centers, hotels, a convention center, an amusement park, and a variety of museums.

Minato Mirai includes most of the area???s major hotels, and it also houses the Yokohama Museum of Art and the Nippon Maru, a four-masted sailing ship/museum permanently docked in the harbor. Other attractions include Cosmo World and the Red Brick Warehouse (see descriptions below for these two). 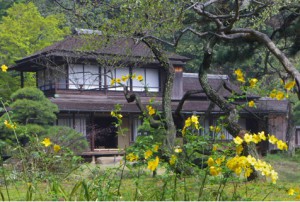 Sankeien Garden is a large Japanese-style garden in southern Yokohama which also showcases a number of Japanese historic buildings. At over 175,000 sq. meters in size, there is a charming pond, streams, a wide variety of flowers and enjoyable walking trails around the garden.

The garden was built by Hara Sankei and opened to the public in 1904. Among the historic buildings exhibited in the park are an elegant residence of a Daimyo (feudal lord), several tea houses, the main hall and a tall pagoda relocated from Kyoto???s Old Toumyouji Temple.

Admission is ?500 and the gardens are open from 9am to 5pm. The garden is a famous viewing spot for plum and cherry blossoms, azaleas, and autumn leaves. 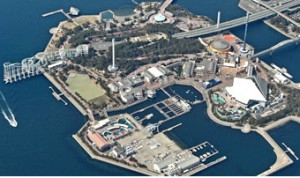 This man-made island at the tip of Yokohama Bay, is an entertainment complex equipped with a highly-rated aquarium, amusement park, shopping mall, hotel, marina, fish farm and lagoon.There is also a roller coaster, Surf Coaster, that swings out over the ocean, and a vertical fall amusement ride, Blue Fall.

The island is approximately 24ha, and is about 18 times larger than Tokyo Dome. Interestingly, admission into this island park is not charged and visitors are free to visit its park areas, stroll along the promenades, shop at the stores or dine at the restaurants. Entrance tickets are required for the Aqua Resorts (aquarium section) and for Pleasure Land (the amusement park section). 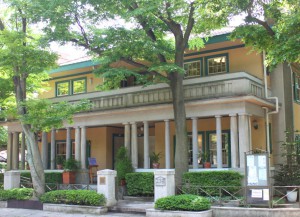 The Yamate District retains a number of sites relating to its history as the main residential district of foreigners in Yokohama. However, because of the Great Kanto Earthquake, few of them predate 1923. Y The largest park in the Yamate District is the Harbor View Park. It is on these park grounds, that one can find the preserved buildings, which are open to the public. Most of the buildings are former residences and most have been furnished in their original style.

Below the hills of Yamate District is the Motomachi shopping street. The street houses a large number of high-end fashion shops, cafes and restaurants and has a slight European feel to it. 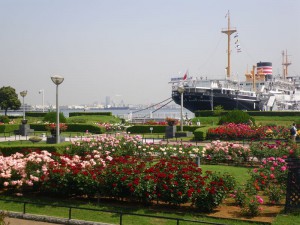 Yamashita Park is a public park that stretches about 750 meters along the waterfront of Yokohama. The park is about a hundred meters wide, and consists mostly of open green space. It was constructed after the Great Kanto Earthquake of 1923.

Docked at the park, is the Hikawa Maru, an ocean liner built in 1929, and is now a museum the preserves the original design and architecture of the liner. Visitors are able to tour the deck, see the cabins, art deco lounge areas and other details from that period era. 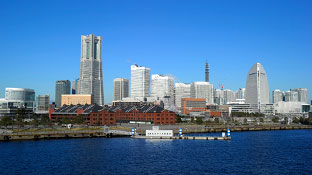 Located in the Minato Mirai area, The Cosmo World amusement park basically houses roller coaster rides, carnival attractions, a kid’s zone and a large Ferris wheel. The most attractive feature of this park is when it is illuminated in the evenings. Food stands are located throughout the park.

The Red Brick Warehouse was once used for port customs. Today, the buildings are open to tourists and are an attractive stopping point along the harbor. The warehouses house events, art exhibitions, theatre and music along with its shopping mall and restaurant arcade. A balcony on the third floor offers attractive harbor views.

Here are a few useful links for planning an outing and also for more sights.