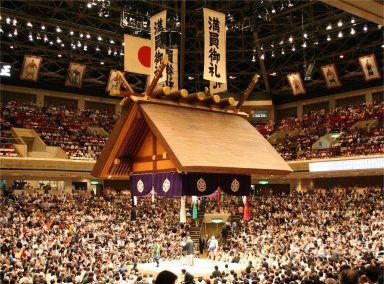 Ry??goku Kokugikan (筝≦?遵?醇??蕕?), also known as Sumo Hall, is an indoor sporting arena located in Ryogoku, Tokyo, next to the Edo Tokyo Museum.
Ryogoku Kokugikan was built in 1909, led by the growing popularity of Sumo during the Meiji period.? It is the third building built in Tokyo associated with the name Kokugikan.
The current building was opened in 1985 and has a capacity of 13,000 people. It is mainly used for?Sumo restling tournaments (????贋??) and hosts the?new year tournament (?????贋??)?in January, the summer tournament (紊???贋??)?in May, and the?autumn tournament (腱???贋??) in September.
The venue is also used for other indoor events, such as boxing, pro wrestling, and music concerts.
It also houses a museum.??There are exhibitions about past and present Sumo wrestlers. 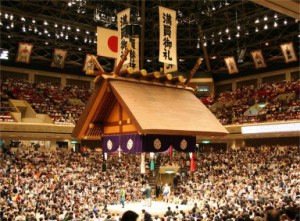 Sumo tickets can be bought online.? Tournaments are not always being held, so check out the schedule on the web site.