Christmas cards are not so popular in Japan, but there is an equivalent tradition.? Japanese people give greetings on New Year’s Day.? The postcard which is sent for this is?called Nengajo (綛頑?????).
Unlike Christmas cards, nengajo shouldn’t arrive before New Year’s Day.? The post office stocks Nengajo in late December, and delivers them on January 1st all at once.? You should send Nengajo to the post office by Christmas, to have it delivered on the correct day.? This New Year’s card postal system was set up as early as 1899. 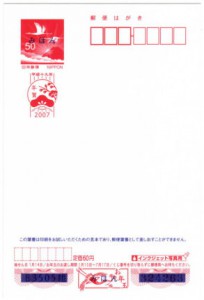 Many people use not normal postcards, but special Nengajo with lottery numbers (???綛雁??篁????綛頑??????????otoshidama-tsuki nenga hagaki) issued by the Post and Telecommunication Ministry. ?On January 15th, the winning numbers are picked and the results are announced the following day on television and in newspapers.? The holders of winning numbers receive prizes.

Usually on Nengajo,a motif of the?present year’s Eto (綛我??, zodiacal animal) is used.???The animal of?2011 is the?rabbit (???).? These?Nengajo with Eto motifs can be purchased at the post office, or you can download the designs on the Internet.? Of course, you can design your original Nengajo too.